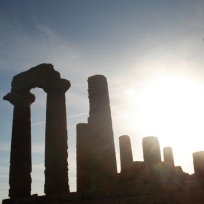 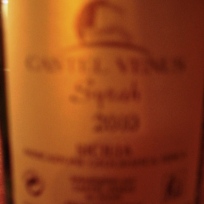 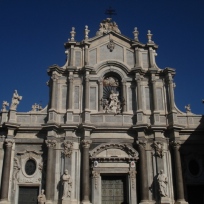 Fountain of the Elephant (Fontana dell-Elefante) 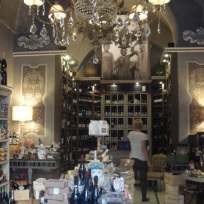 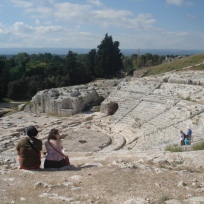 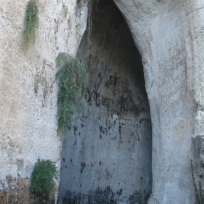 Looking toward the Piazza del Duomo

Looking into the Piazza del Duomo from Cattedrale di Siracusa 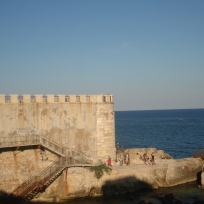 We decided we’d had enough driving for awhile, so we did Sicily by train.   We were hesitant about dragging bags from place to place and making connections, and it did limit us to just a few towns, but it  worked out really well for us.   We flew into Palermo and then took the train to Agrigento.   The Valley of the Temples is such a fantastic experience, it was worth doing even though it was nearly a full day’s travel to get to our next destination.  Eight Greek temples of the ancient world remain there, some incredibly well-preserved, going back as far as the 6th century BC.  There is something so powerful about contemplating the many civilizations that have made the island of Sicily their home.

The Grand Hotel Dei Templi was not really well located, I’d rather have had a B&B in town, but we figured out the buses and managed to get where we needed to go, at least in the daylight hours.   At night, we were stuck paying for taxis.   That said, the hotel itself is in an absolute time warp—not to ancient Greece or even Sicily circa 1900—more like Oceania circa 1970. A bit weird.   The first night we enjoyed one of the best dinners we’ve had on the entire trip.   The restaurant Ambasciata di Sicilia, which has been a city staple since the end of WW I, has a beautiful terrace overlooking the city rooftops.http://www.ristorantelambasciatadisicilia.it/ The weather was mild enough to dine outdoors, so of course we did.   The Pasta con le Sarde was incredibly fresh—thick pasta with fresh sardines, wild fennel, and a touch of mint.   We wanted to lick the bowl!   Swordfish in every possible form is served all over Sicily, and we had two swordfish dishes, one of involtini, swordfish rolls stuffed with pine nuts, bread crumbs, raisins, and some other secrets I couldn’t quite put my finger on.  So yummy.  The other swordfish dish was a steak served with tomatoes, olives, capers, and wine.   Incredibly rich and flavorful.  The wine, a Sicilian Nero D’avola was just gorgeous, and we found it ironic that it was called “Castel Venus” since we were sitting there overlooking a castle with Venus rising in the night sky. Poetic! I’ll leave it to your imagination to explain why the photo of the wine label is blurry. We enjoyed the food and the atmosphere so much that we even had coffee, dessert, after-dinner drinks.  We didn’t want to leave.   But eventually, the taxi came and whisked us back to our weird little hotel where we had warm gin and tonic (the ice machine was broken) and went to bed. http://www.grandhoteldeitempli.it/

Next day, we had a long trip to Syracusa.    We knew there would be a three-hour layover in Catania, making the trip take the better part of a day.  But the good news was that the train station is quite central in Catania, so we could check our bags at the station and walk to the Piazza del Duomo, visit the Church dedicated to St. Agatha, and have a nice lunch of pizza and salad before heading back to the station.  We asked someone directions and he gave us very clear instructions: “Continue on this street until you run into the elephant.” It sounds even better in Italian.  He was talking about the Fontana dell’Elefante, featuring an elephant, symbol of the city, carved from black lava from Mt. Etna, in the beautifully-designed Piazza.  This little excursion was something we could never have done in an airport layover.   I must also note that every single person we spoke to in Sicily, from taxi drivers to strangers on the street, were helpful and welcoming, kind and friendly.

We arrived in Syracusa and settled in for the night.   In the morning, we visited the Parco Archeologico della Neapolis, with its Teatro Greco amphitheater, where  Euripides’ plays were mounted and Archimedes is said to be buried.  We also had to see the celebrated “ear of Dyonisus,” the cave with ear-shattering acoustics.  And, yes, I did sing.  I sounded amazing, I thought, until an English choral group entered the cave and did a well-rehearsed dirge.   THEY sounded amazing.

On Ortygia Island, the old city of Syracusa has been inhabited for two thousand years.   The Piazza del Duomo was lovely, dominated by the cathedral incorporating architectural fragments from a 5th Century BC temple to Athena, with 26 of the original columns still in place, and the cathedral built over it.  This cathedral honors patron Saint Lucia.  St. Lucy is a very important Christian martyr, and we also have special feelings for Lucy because that is our granddaughterwe ’s name!

But the most thrilling part of being in the Piazza was the smaller Church of St. Lucia on the other side of the square.   Here, Caravaggio’s “La Sepoltura di Santa Lucia”  (the Burial of St. Lucy) is displayed.  After many years in a nearby museum, it has been returned to the church.   Artwork of this magnitude seems to have even more power when viewed in situ–just beautiful. We couldn’t take photos in the basilica or the Church of St. Lucy, but the link will give you a taste of the Caravaggio: http://stevengivler.blogspot.com.es/2011/12/viewing-caravaggios-burial-of-st-lucy.html

We also visited the Palazzo Bellomo museum, a 13th-century palace with a very good collection of paintings from the Middle Ages and Renaissance.   After that, we took  a walk all around the Island of Ortygia. It took longer than expected and went through a couple of sketchy areas,  although the sea views were quite beautiful.  But I wouldn’t recommend doing it again.

The next day, we were ready  to chill relax in Taormina.  More about that in the next post, including the explosions on Mt. Etna!

Please click on a thumbnail and look through our pictures of Sicily, part one.