We couldn’t leave the Arles area without a quick stop in Nîmes.   Yes,  another Roman arena—but this one is probably the best preserved Roman Arena in the world, with 24,000 seats and 60 arches.  There is also a temple, the Maison Carrée, surviving almost intact from the Roman Empire, smack in the middle of the city, dating to 4 BC.   Pretty amazing. 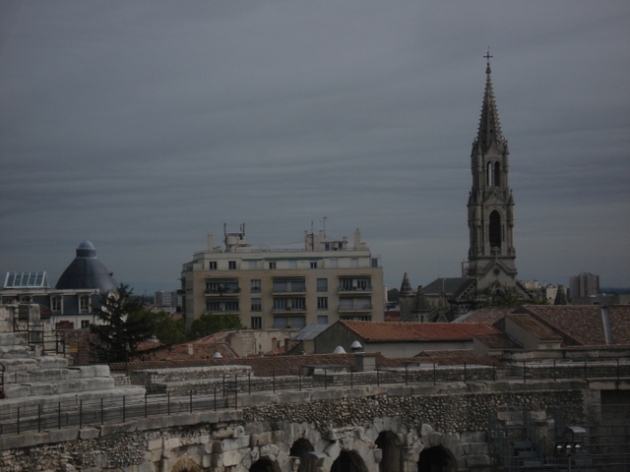 After that, we drove south to Marseilles.   We had a bit of a problem finding our apartment in this big bustling city.  Then, when we finally found it we were sorry we did.  It was a garret straight out of La Boheme, a seedy seven-story walk-up with some maintenance issues.  We complained, the owner got us moved into a better place (not a GREAT place, but better) a few blocks away (this one only six stories up!) and the rest of our time in Marseilles was great.  It was the first place in all of our bargain-basement lodgings that was not acceptable.  Considering all the moving around we’ve done, one bad experience is not so tragic.

We were so very happy that Ray’s old chum John from the UK decided to meet us in Marseilles for the weekend.  It had been several years since they’d seen each other, and though I’d met John when he was in New York, we had not known each other as couples. As expected, Julie is as fun-loving and sweet as John.   J & J stayed in the Sofitel near the old port—much more elegant digs than we had, to be sure! Good thing, or they’d never have agreed to travel with us again!  Nevertheless, they stopped by our ‘hovel’ to share in the lovely wines we brought back from the Cote du Rhone wine tastings earlier that week.  Incredible vintage Gigondas in water glasses, sitting on Ikea bar stools in a 6-floor walk up.   Definitely a contract between beverage and setting.  It was such fun just to be with them.  We couldn’t have had a better time, and I know that it won’t be several MORE years until we get together again.   Ray and I were both so touched that John and Julie took this trip just to spend some time with us—that’s real friendship! 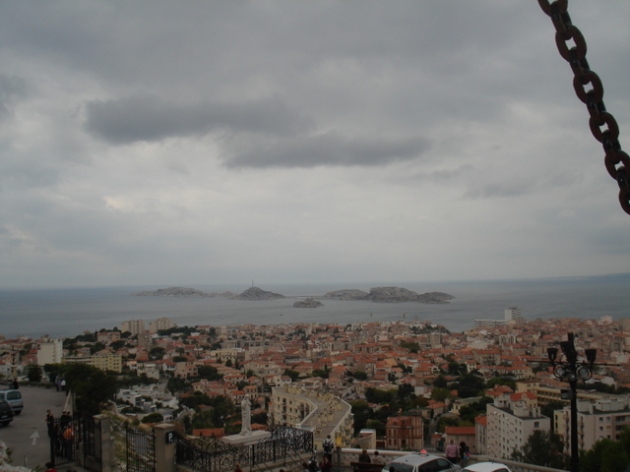 Beside enjoying some wonderful seafood dinners and way too much wine in Marseilles, we took a drive together to Cassis to see the port and the amazing Mediterranean fjords—the Calanques.  The little port town of Cassis is post-card pretty, with castle ruins, fortress walls, sunny beaches, and a charming port with sport, tour, and fishing boats—and the occasional uber-luxury yacht.

We had a lovely lunch outside on a café terrace before boarding a boat.   John is not the world’s most enthusiastic sailor, and we were warned that the sea was a bit rough that day; but he was a great sport and managed to get through the trip without-er—incident.  Gouged out by glaciers thousands of years ago, the dramatic cliffs and inlets are incredibly beautiful.  I was envious of the kayakers we saw in the inlets, even though conditions seemed pretty challenging.   If we’re lucky enough to visit Cassis again, I know we’ll give the kayaks a try! (If they don’t have a “no geezers” rule!)

Ray has really enjoyed driving the winding and scenic routes all through our travels, and he has been a great navigator and adventurous wanderer throughout.  But nothing compares with La Route des Crêtes.  This winding road up to the top of Cap Caneille (the largest of the cliffs with a 1200 foot drop straight down) and then on to the next town, La Ciotat.   The views were worth the white knuckles!   Then back to Marseilles for some well-deserved wine and another great dinner. 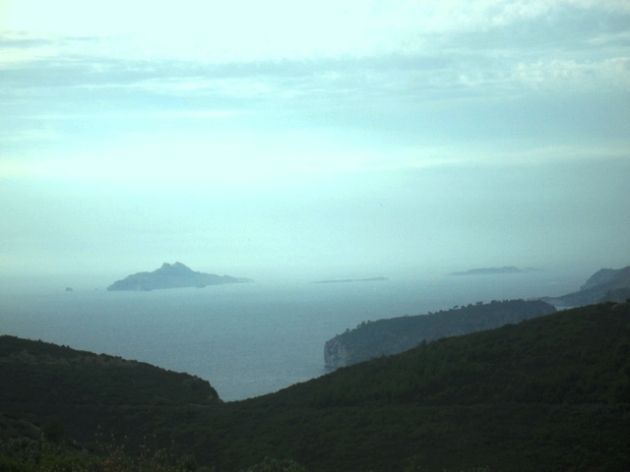 Next morning, we took the “petit train” –the little tourist put-put—from the old port up and up through the narrow streets to the Basilica de Notre Dame de la Garde overlooking the city. Another high point—literally and figuratively.   Magnifique!